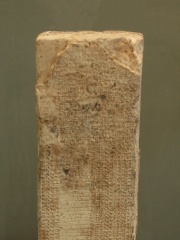 Naplanum was the first independent king of the ancient Near Eastern city-state of Larsa ca. 1961 BC to 1940 BC (short chronology) — roughly during the reign of Ibbi-Sin of the Third dynasty of Ur and the great famine — according to the later Larsa King List. No contemporary year names or inscriptions have been found verifying that Naplanum was a king of Larsa, which seems to have remained part of Ibbi-Sin's kingdom. Read more on Wikipedia

Since 2007, the English Wikipedia page of Naplanum has received more than 25,033 page views. His biography is available in 15 different languages on Wikipedia. Naplanum is the 12,500th most popular politician.

Page views of Naplanums by language

Among politicians, Naplanum ranks 12,500 out of 15,710. Before him are Dorothea Köring, Job Cohen, Pencho Zlatev, Per Ahlmark, Abdur Rahman Biswas, and Eulalio Gutiérrez. After him are Cecilia of Normandy, Mike Honda, Ameenah Gurib, Mari Kiviniemi, Jay Garner, and Eligio Ayala.