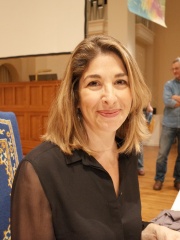 Naomi A. Klein (born May 8, 1970) is a Canadian author, social activist, and filmmaker known for her political analyses, support of ecofeminism, organized labour, left-wing politics and criticism of corporate globalization, fascism, ecofascism and capitalism. As of 2021 she is Associate Professor, and Professor of Climate Justice at the University of British Columbia, co-directing a Centre for Climate Justice.Klein first became known internationally for her alter-globalization book No Logo (1999). The Take (2004), a documentary film about Argentina's occupied factories, written by her and directed by her husband Avi Lewis, further increased her profile, while The Shock Doctrine (2007), a critical analysis of the history of neoliberal economics, solidified her standing as a prominent activist on the international stage. Read more on Wikipedia