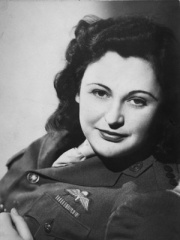 Nancy Grace Augusta Wake, (30 August 1912 – 7 August 2011) (also known as Nancy Fiocca) was a nurse and journalist who joined the French Resistance and later the Special Operations Executive (SOE) during World War II, and briefly pursued a post-war career as an intelligence officer in the Air Ministry. The official historian of the SOE, M. R. D. Foot, said that "her irrepressible, infectious, high spirits were a joy to everyone who worked with her".Born in the suburb of Roseneath in Wellington, she moved first to Sydney in Australia as a child, and then to Paris in the 1930s. Wake was living in Marseille with her French industrialist husband, Henri Fiocca, when the war broke out. Read more on Wikipedia

Among SOCIAL ACTIVISTS In New Zealand

Among social activists born in New Zealand, Nancy Wake ranks 1. After her are Peter Arnett (1934).