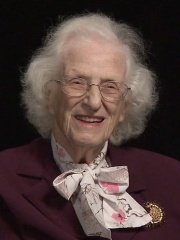 Nancy Grace Roman (May 16, 1925 – December 25, 2018) was a noted American astronomer who made important contributions to stellar classification and motions, and became the first female executive at NASA, and served as NASA’s first Chief of Astronomy throughout the 1960s and 1970s, establishing her as one of the "visionary founders of the US civilian space program". She created NASA’s space astronomy program and is known to many as the "Mother of Hubble" for her foundational role in planning the Hubble Space Telescope. Throughout her career, Roman was also an active public speaker and educator, and an advocate for women in the sciences. Read more on Wikipedia

Since 2007, the English Wikipedia page of Nancy Roman has received more than 137,438 page views. Her biography is available in 23 different languages on Wikipedia making her the 279th most popular astronomer.