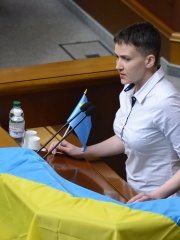 Nadiya Viktorivna Savchenko (Ukrainian: Надія Вікторівна Савченко; born 11 May 1981) is a Ukrainian politician, former Army aviation pilot in the Ukrainian Ground Forces and former People's Deputy of Ukraine. During the 2014 War in Donbas Savchenko, a first lieutenant in the Ukrainian Ground Forces, served as instructor with a volunteer infantry unit, the Aidar Battalion. In June 2014, she was captured by pro-Russian forces in eastern Ukraine and handed over to Russia where she was accused of having directed artillery fire that killed two Russian state-television journalists at the positions of pro-Russian forces in Ukraine.She was subsequently charged and convicted of murder and illegally crossing the Russian state border despite being abducted from Ukrainian territory one hour before the deaths of the journalists. Read more on Wikipedia