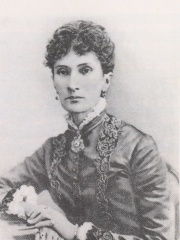 Nadezhda Filaretovna von Meck (Russian: Надежда Филаретовна фон Мекк; 10 February [O.S. 29 January] 1831 – 13 January 1894) was a Russian businesswoman who became an influential patron of the arts, especially music. She is best known today for her artistic relationship with Pyotr Ilyich Tchaikovsky, supporting him financially for thirteen years, so that he could devote himself full-time to composition, while stipulating that they were never to meet. Tchaikovsky dedicated his Symphony No. Read more on Wikipedia

Among religious figures, Nadezhda von Meck ranks 968 out of 2,272. Before her are Mesud II, Agostino Casaroli, Scipione Borghese, Benedict the Moor, Juan Diego, and Frumentius. After her are Pedro Casaldáliga, Ibn Sa'd, Peter Faber, Günter Guillaume, Joanna, wife of Chuza, and John of Montecorvino.

Among RELIGIOUS FIGURES In Russia