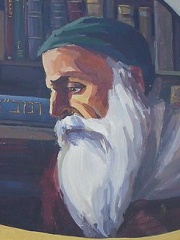 Moses ben Nachman (Hebrew: מֹשֶׁה בֶּן־נָחְמָן Mōše ben-Nāḥmān, "Moses son of Nachman"; 1194–1270), commonly known as Nachmanides (; Greek: Ναχμανίδης Nakhmanídēs), and also referred to by the acronym Ramban (רמב״ן‎) and by the contemporary nickname Bonastruc ça Porta (literally "Mazel Tov near the Gate", see astruc), was a leading medieval Jewish scholar, Sephardic rabbi, philosopher, physician, kabbalist, and biblical commentator. He was raised, studied, and lived for most of his life in Girona, Catalonia. Read more on Wikipedia

Nachmanides is most famous for his commentary on the Torah.

Page views of Nachmanides by language

Among people born in 1194, Nachmanides ranks 2. Before him is Frederick II, Holy Roman Emperor. After him are Muhammad I of Granada, Rusudan of Georgia, Ezzelino III da Romano, Hugh I of Cyprus, and Jacopo Contarini. Among people deceased in 1270, Nachmanides ranks 4. Before him are Louis IX of France, Béla IV of Hungary, and Margaret of Hungary. After him are Tannhäuser, Maria Laskarina, Theobald II of Navarre, Shvarn, Isabelle of France, John Tristan, Count of Valois, Hethum I, King of Armenia, and Si Inthrathit.