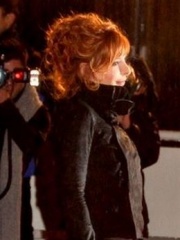 Mylène Jeanne Gautier (French: [milɛn ʒan ɡotje]; born 12 September 1961), known professionally as Mylène Farmer ([milɛn faʁmœʁ]), is a Canadian-born French singer, songwriter, occasional actress, writer, and entrepreneur. Having sold more than 30 million records in France, she is among the most successful recording artists of all time in that country. She holds the record for the most number one hit singles in the French charts, with twenty-one to date – eight of which were consecutive.Born in Pierrefonds, Quebec, Canada (a former city that is now part of the Montreal borough of Pierrefonds-Roxboro), to French parents, the family soon relocated to Chaville, near Paris, where Farmer pursued a career in modelling and acting. Read more on Wikipedia