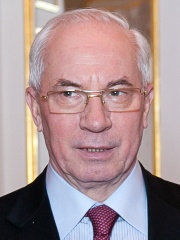 Mykola Yanovych Azarov (Ukrainian: Мико́ла Я́нович Аза́ров; Pakhlo; Cyrillic: Пахло; born 17 December 1947) is a Ukrainian politician who was the Prime Minister of Ukraine from 11 March 2010 to 27 January 2014. He was the First Vice Prime Minister and Finance Minister from 2002 to 2005 and again from 2006 to 2007. Read more on Wikipedia

Among politicians, Mykola Azarov ranks 3,012 out of 15,577. Before him are Siad Barre, Palamedes, Emperor Go-Daigo, Rudolf Kjellén, Philopoemen, and Albert V, Duke of Bavaria. After him are Pavlo Skoropadskyi, George Vella, Giuseppe Guarneri, Gnaeus Domitius Corbulo, Princess Charlotte of Wales, and Seongjong of Goryeo.