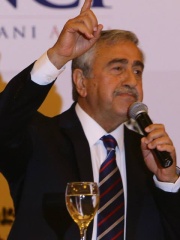 Mustafa Akıncı (Turkish pronunciation: [mustaˈfa akɯnˈdʒɯ]; born 28 December 1947) is a Turkish Cypriot politician who was the President of Northern Cyprus from April 2015 until October 2020. An architect by profession, Akıncı in 1976 became the first elected mayor of the Nicosia Turkish Municipality in Northern Cyprus, at the age of 28. He defeated a candidate endorsed by President Rauf Denktaş as the candidate of the Communal Liberation Party (TKP). Read more on Wikipedia

Among politicians, Mustafa Akıncı ranks 4,698 out of 15,710. Before him are Jeremi Wiśniowiecki, Emperor Yōmei, Sin-Muballit, Peter Delyan, Georg von Hertling, and Tsarevna Catherine Ivanovna of Russia. After him are Matilda of England, Duchess of Saxony, Princess Milica of Serbia, Kim Jae-gyu, Pim Fortuyn, Ordoño I of Asturias, and Charles, Cardinal of Lorraine.