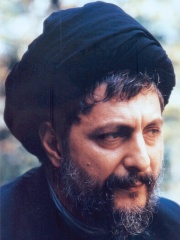 Musa Sadr al-Din al-Sadr (Arabic: موسى الصدر‎‎‎; 4 June 1928 – disappeared 31 August 1978) was an Iranian-born Lebanese scholar and political leader who founded the Amal Movement.Born in the Chaharmardan neighborhood of Qom, Iran, he underwent both seminary and secular studies in Iran. He belongs to the Sadr family from Jabal Amel in Lebanon, a branch of the Musawi family tracing to Musa Ibn Jaafar, the seventh Shia Imam and ultimately to the Islamic prophet Muhammad through his daughter Fatima. Therefore, Musa al-Sadr is often styled with the honorific title Sayyid. Read more on Wikipedia

Since 2007, the English Wikipedia page of Musa al-Sadr has received more than 365,336 page views. His biography is available in 20 different languages on Wikipedia. Musa al-Sadr is the 147th most popular social activist (up from 153rd in 2019), the 145th most popular biography from Iran (down from 144th in 2019) and the 3rd most popular Iranian Social Activist.

Among SOCIAL ACTIVISTS In Iran