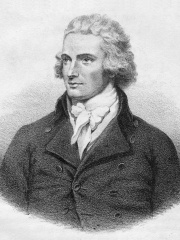 Mungo Park (11 September 1771 – 1806) was a Scottish explorer of West Africa. After an exploration of the upper Niger River around 1796, he wrote a popular and influential travel book titled Travels in the Interior Districts of Africa in which he theorized the Niger and Congo merged to become the same river. He was killed during a second expedition, having successfully traveled about two-thirds of the way down the Niger. Read more on Wikipedia

Since 2007, the English Wikipedia page of Mungo Park has received more than 15,240 page views. His biography is available in 46 different languages on Wikipedia making him the 198th most popular physician.

Among physicians, Mungo Park ranks 197 out of 438. Before him are Leonhart Fuchs, Engelbert Kaempfer, Nicolaes Tulp, Fritz Klein, Leander of Seville, and Bernardo Houssay. After him are Carl von Rokitansky, Werner Haase, Constantine the African, Merit-Ptah, Harvey Cushing, and John O'Keefe.