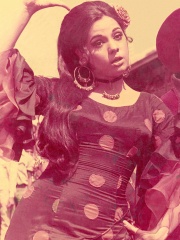 Mumtaz Askari Madhvani (born 31 July 1947) is an Indian actress. Primarily known for her work in Hindi films, she is the recipient of a Filmfare Award, and the Filmfare Lifetime Achievement Award, for her contributions to Hindi cinema.Born into poverty in an urban slum in Mumbai, Mumtaz made her acting debut at age 11 with Sone Ki Chidiya (1958). Following smaller roles as a teenager in films like; Stree (1961), Sehra (1963), and Gehra Daag (1963), Mumtaz progressed to leading roles with a series of action films opposite wrestler Dara Singh in films like; Faulad (1963) and Daku Mangal Singh (1966). Read more on Wikipedia

Page views of Mumtazs by language