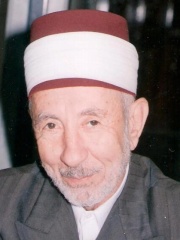 Mohammed Said Ramadan Al-Bouti (Arabic: مُحَّمَد سَعِيد رَمَضَان ٱلْبُوطِي, romanized: Muḥammad Saʿīd Ramaḍān al-Būṭī) was a notable Sunni Muslim scholar who was also known as "Shaykh of the Levant". He was killed on 21 March 2013, during the Syrian civil war, reportedly in a bomb explosion, though "many questions about the death" have been raised by videos of the scene.Called a "prolific writer whose sermons were regularly broadcast on television", and "more familiar to Syrian TV viewers than anybody other than President Bashar al-Assad", Al-Bouti authored more than sixty books on various Islamic issues, and was considered an important scholar of the approach based on the four schools of Sunni Islam and the orthodox Ash'arite creed. Other than his religious works, he also has worked in literature. Read more on Wikipedia

Among writers, Muhammad Said Ramadan al-Bouti ranks 1,581 out of 5,755. Before him are Alexander Belyaev, Alice Walker, Olaudah Equiano, James Ellroy, Ippolita Maria Sforza, and Alistair MacLean. After him are Sri Chinmoy, Yan Fu, Táhirih, Remy de Gourmont, Else Lasker-Schüler, and Ono no Komachi.