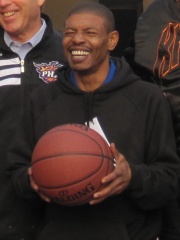 Tyrone Curtis "Muggsy" Bogues (born January 9, 1965) is an American former basketball player. The shortest player ever to play in the National Basketball Association (NBA), the 5 ft 3 in (1.60 m) Bogues played point guard for four teams during his 14-season career in the NBA. Although best known for his ten seasons with the Charlotte Hornets, he also played for the Washington Bullets, Golden State Warriors, and Toronto Raptors. Bogues finished in the top seven in assists in six consecutive seasons (1989–1995), and in the top ten in steals in three of those seasons. Read more on Wikipedia