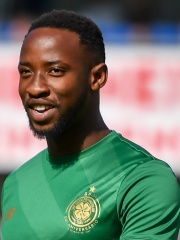 Moussa Dembélé (born 12 July 1996) is a French professional footballer who plays as a striker for Ligue 1 club Lyon. Developed at Paris Saint-Germain and Fulham, Dembélé made his professional debut for Fulham in the Premier League in November 2013. He scored 19 goals in 64 matches for Fulham before joining Celtic in 2016. Read more on Wikipedia

Since 2007, the English Wikipedia page of Moussa Dembélé has received more than 1,087,941 page views. His biography is available in 26 different languages on Wikipedia making him the 4,417th most popular soccer player.