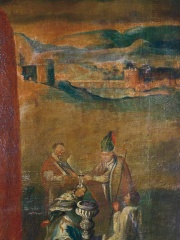 Since 2007, the English Wikipedia page of Morta has received more than 32,846 page views. Her biography is available in 15 different languages on Wikipedia. Morta is the 10,666th most popular politician, the 82nd most popular biography from Lithuania and the 30th most popular Lithuanian Politician.

Page views of Mortas by language

Among politicians, Morta ranks 10,666 out of 15,710. Before her are Eric Trolle, Cynewulf of Wessex, Nicolae Bălcescu, Meng Hongwei, Gaius Cornelius Cethegus, and Solomon Lozovsky. After her are Chung Hong-won, Maximilian Ulysses Browne, Mariano Melgarejo, Shaushtatar, Vince Lombardi, and Thomas Wyatt the Younger.

Among people born in 1210, Morta ranks 16. Before her are Toros Roslin, Muqi, Giacomo da Lentini, Joan of England, Queen of Scotland, Campanus of Novara, and Henry de Bracton.  Among people deceased in 1260, Morta ranks 10. Before her are Accursius, Sinchi Roca, Hadewijch, Albert I, Duke of Saxony, Giacomo da Lentini, and Maria of Brabant, Holy Roman Empress. After her are Constance of Toulouse and Minhaj-i-Siraj.