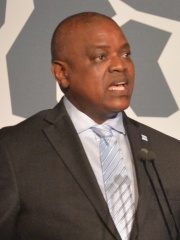 Mokgweetsi Eric Keabetswe Masisi (born 21 July 1961) is the fifth and current President of Botswana, serving since 2018. He has also served as Minister of Education since 2014, and previously he was Minister of Presidential Affairs and Public Administration from 2011 to 2014. Read more on Wikipedia

Since 2007, the English Wikipedia page of Mokgweetsi Masisi has received more than 289,415 page views. His biography is available in 27 different languages on Wikipedia making him the 12,545th most popular politician.