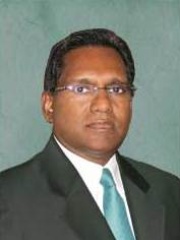 Mohamed Waheed Hassan Manik (Dhivehi: ޑރ. މުޙައްމަދު ވަޙީދު ޙަސަން މަނިކު; Arabic: مُحَمَّد وَحِيد حَسَن مَانِيك; born 3 January 1953) was the 5th President of the Maldives from 7 February 2012 to 17 November 2013, having succeeded to office following the disputed resignation of President Mohamed Nasheed, under whom Waheed had served as the Maldives' first Vice President in over half a century since 2008. He had previously worked as a news anchor, a United Nations official with UNICEF, UNDP and UNESCO, and a member of the Maldivian Parliament. Read more on Wikipedia

Since 2007, the English Wikipedia page of Mohammed Waheed Hassan has received more than 91,467 page views. His biography is available in 31 different languages on Wikipedia making him the 11,324th most popular politician.

Others born in Maldives