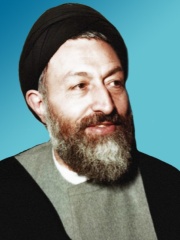 Mohammad Hosseini Beheshti (Persian: سیّد محمد حسینی بهشتی‎; 24 October 1928 – 28 June 1981) was an Iranian jurist, philosopher, cleric and politician who was known as the second person in the political hierarchy of Iran after the revolution. Beheshti is considered to have been the primary architect of Iran's post-revolution constitution, as well as the administrative structure of the Islamic Republic. Beheshti is also known to have selected and trained several prominent politicians in the Islamic Republic, such as former presidents Hassan Rouhani and Mohammad Khatami, Ali Akbar Velayati, Mohammad Javad Larijani, Ali Fallahian, and Mostafa Pourmohammadi. Read more on Wikipedia

Among politicians, Mohammad Beheshti ranks 8,952 out of 15,710. Before him are Ekmeleddin İhsanoğlu, Kilij Arslan III, Antigenes, Şükrü Saracoğlu, Marie I, Countess of Boulogne, and Thomas R. Marshall. After him are Mihailo Vojislavljević, Yekuno Amlak, Nergal-ushezib, Vera Kholodnaya, John II of Cyprus, and Martín Vizcarra.