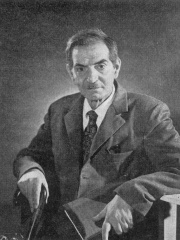 Seyyed Mohammad Hossein Behjat Tabrizi (Persian: سید محمدحسین بهجت تبریزی, Azerbaijani: سید محمدحسین بهجت تبریزی) (January 2, 1906 – September 18, 1988), mainly known by his pen name, Shahriar (Persian: شهریار listen), was a notable Iranian Azerbaijani poet who wrote in both Azerbaijani and Persian. His most important work, Heydar Babaya Salam is considered to be the pinnacle in Azerbaijani literature which gained great popularity in the Turkic world and was translated to more than 30 languages.Contrary to many other figures of his time, Shahriar barely involved himself with political problems and ideologies. Read more on Wikipedia

Among writers, Mohammad-Hossein Shahriar ranks 2,169 out of 5,755. Before him are Princess Michael of Kent, Idries Shah, Saki, Marcel Achard, Paul Féval, père, and Charles de Brosses. After him are Lucilius Junior, Oscar Milosz, Cigerxwîn, Phocylides, Magnús Scheving, and Theodore Sturgeon.