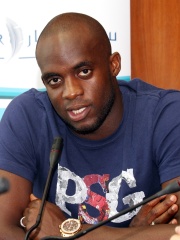 Mohamed Lamine Sissoko (born 22 January 1985) is a former professional footballer who played as a defensive midfielder. Born in France, he could have elected to play for France internationally, but chose instead to play for the national side of his ancestral country, Mali. Read more on Wikipedia

Among soccer players, Mohamed Sissoko ranks 3,354 out of 16,923. Before him are Jérémy Toulalan, André Saeys, Willie Watson, Ever Palacios, Enzo Robotti, and David Pegg. After him are Toshihiko Okimune, Sunday Oliseh, Milivoje Novaković, Clément Lenglet, Ange Postecoglou, and Aleksei Paramonov.