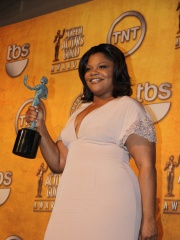 Monique Angela Hicks (née Imes; born December 11, 1967), known professionally as Mo'Nique, is an American comedian and Academy Award winning actress. She first gained fame as a member of The Queens of Comedy, as well as her role as Nicole "Nikki" Parker in the UPN series The Parkers while making a name as a stand-up comedian hosting a variety of venues, including Showtime at the Apollo. Mo'Nique transitioned to film with roles in such films as Phat Girlz (2006) and Welcome Home Roscoe Jenkins (2008). Read more on Wikipedia

Since 2007, the English Wikipedia page of Mo'Nique has received more than 2,414,751 page views. Her biography is available in 36 different languages on Wikipedia making her the 6,487th most popular actor.

Page views of Mo'Niques by language

Among actors, Mo'Nique ranks 6,445 out of 8,832. Before her are Nadine Velazquez, Paresh Rawal, Lin-Manuel Miranda, Sandra Hüller, Saskia Reeves, and Justina Machado. After her are Dacre Montgomery, Erik Per Sullivan, Gail O'Grady, Ana Paula Arósio, Patty McCormack, and Vladislav Galkin.