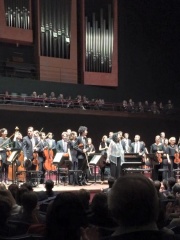 Dame Mitsuko Uchida, DBE (内田光子, [ɯtɕida miꜜtsɯ̥ko]; born 20 December 1948) is a classical pianist and conductor, born in Japan and naturalised in Britain, particularly noted for her interpretations of Mozart and Schubert. She has appeared with many notable orchestras, recorded a wide repertory with several labels, won numerous awards and honours (including Dame Commander of the Order of the British Empire in 2009) and has since 2013 been Artistic Director of the Marlboro Music School and Festival, the only musician to be its sole Artistic Director since co-founder Rudolf Serkin. Read more on Wikipedia

Among MUSICIANS In Japan