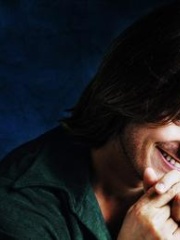 Mitchell Lee Hedberg (February 24, 1968 – March 29, 2005) was an American stand-up comedian known for his surreal humor and deadpan delivery. His comedy typically featured short, sometimes one-line jokes mixed with absurd elements and non sequiturs.Hedberg's comedy and onstage persona gained him a cult following, with audience members sometimes shouting out the punchlines to his jokes before he could finish them. Read more on Wikipedia

Since 2007, the English Wikipedia page of Mitch Hedberg has received more than 4,053,993 page views. His biography is available in 35 different languages on Wikipedia making him the 7,911th most popular comedian.

Among comedians, Mitch Hedberg ranks 86 out of 8. Before him are Dane Cook, Bill Burr, B. J. Novak, Aziz Ansari, Chelsea Handler, and Nick Kroll. After him are Kenan Thompson, Ralphie May, Carrie Brownstein, and Bo Burnham.