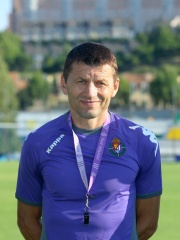 Miroslav Đukić (Serbian Cyrillic: Мирослав Ђукић, pronounced [mǐroslaʋ dʑǔkitɕ]; born 19 February 1966) is a Serbian former footballer who played as a sweeper, and a manager. He spent 14 years of his professional career in Spain, notably at the service of Deportivo de La Coruña and Valencia, amassing La Liga totals of 368 games and 11 goals and winning a combined six major titles for the two teams. Đukić represented FR Yugoslavia in one World Cup and one European Championship. Read more on Wikipedia

Since 2007, the English Wikipedia page of Miroslav Đukić has received more than 170,941 page views. His biography is available in 24 different languages on Wikipedia making him the 1,848th most popular soccer player.

Among SOCCER PLAYERS In Serbia