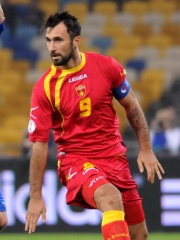 Mirko Vučinić (Montenegrin Cyrillic: Mиpкo Bучинић, pronounced [mǐːrko ʋǔtʃinitɕ]); born 1 October 1983) is a Montenegrin former professional footballer who played as a forward.Having caught the attention of Pantaleo Corvino, the sporting director of the Italian club Lecce, he transferred there in the summer of 2000. He played for Lecce as they moved between Serie A and B. His highest-scoring season was 2004–05, with 19 goals in 28 games in Serie A. In 2006, he joined Roma, where he won the Coppa Italia twice; he later moved on to Juventus in 2011, where he won three consecutive Serie A titles. Read more on Wikipedia

Since 2007, the English Wikipedia page of Mirko Vučinić has received more than 564,711 page views. His biography is available in 44 different languages on Wikipedia making him the 2,334th most popular soccer player.

Among SOCCER PLAYERS In Montenegro