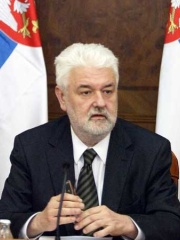 Mirko Cvetković (Serbian Cyrillic: Мирко Цветковић, pronounced [mǐːrkɔ tsʋɛ̂tkɔʋitɕ]; born 16 August 1950) is a Serbian politician and economist who served as the prime minister of Serbia from 2008 to 2012 and as minister of finance from 2007 to 2008, and again from 2011 to 2012. Cvetković became the Prime Minister as an nonpartisan politician endorsed by For a European Serbia coalition, which declared Serbia's accession to the European Union (EU) as its main goal. During his government run, the EU has abolished visas for Serbian citizens traveling to the Schengen Area countries, Serbia received an EU candidate status, as well as, completed obligations to the International Criminal Tribunal for the former Yugoslavia (ICTY). Read more on Wikipedia

Among politicians, Mirko Cvetković ranks 9,719 out of 15,710. Before him are Enlil-kudurri-usur, Prince Aage, Count of Rosenborg, Piet Joubert, Margaret of Nevers, Alexandru Vaida-Voevod, and Adolf I, Prince of Schaumburg-Lippe. After him are Obizzo II d'Este, Marquis of Ferrara, Phoenix, Karen Demirchyan, Josip Manolić, Abdellatif Filali, and José Linhares.