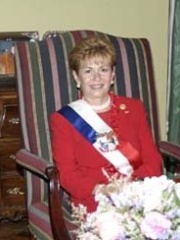 Mireya Elisa Moscoso Rodríguez de Arias (born July 1, 1946) is a Panamanian politician who served as the President of Panama from 1999 to 2004. She is the country's first female president. Born into a rural family, Moscoso became active in the 1968 presidential campaign of three-time president Arnulfo Arias, following and marrying him when he went into exile after a military coup. Read more on Wikipedia

Since 2007, the English Wikipedia page of Mireya Moscoso has received more than 111,245 page views. Her biography is available in 29 different languages on Wikipedia making her the 10,149th most popular politician.

Among politicians, Mireya Moscoso ranks 10,098 out of 14,801. Before her are Kujō Yoritsugu, Ernest Monis, Andrés Pastrana Arango, Alexios III of Trebizond, Celia Sánchez, and Mohammed Basindawa. After her are Anote Tong, Barnabas Sibusiso Dlamini, Otto Gessler, Michel Djotodia, Kadashman-Enlil I, and Prince Johann Georg of Hohenzollern.

Others born in Panama

Among POLITICIANS In Panama