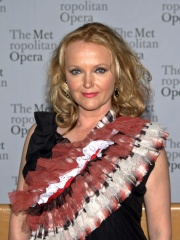 Miranda Jane Richardson (born 3 March 1958) is an English actress. She made her film debut playing Ruth Ellis in Dance with a Stranger (1985) and went on to receive Academy Award nominations for Damage (1992) and Tom & Viv (1994). A seven-time BAFTA Award nominee, she won the BAFTA Award for Best Actress in a Supporting Role for Damage. Read more on Wikipedia

Among actors, Miranda Richardson ranks 1,705 out of 10,030. Before her are Tom Ellis, Laura Linney, Karl Urban, Nell Gwyn, Mickey Hargitay, and Rachel Félix. After her are Per Oscarsson, Peter Capaldi, Felicity Huffman, David Arquette, Sebastian Koch, and Vince Vaughn.