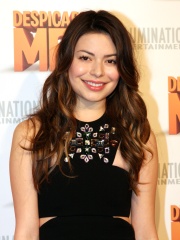 Miranda Taylor Cosgrove (born May 14, 1993) is an American actress and singer. She has received several accolades, including two Young Artist Awards, a Kids' Choice Award and two Daytime Emmy Award nominations, and was listed in the Guinness World Records as the highest paid child actress of 2012.Cosgrove's career began at age seven with several appearances in television commercials, and she made her film debut playing Summer Hathaway in Richard Linklater's School of Rock (2003). She appeared in a number of minor television roles over the next few years before gaining prominence for her work on Nickelodeon, starring as Megan Parker on the television series Drake & Josh (2004–2007) and as Carly Shay in the teen sitcom iCarly (2007–2012), the latter of which earned her widespread recognition. Read more on Wikipedia

Among people born in 1993, Miranda Cosgrove ranks 44. Before her are Ederson, Niall Horan, Alphonse Areola, Fabinho, Victoria Justice, and Garbiñe Muguruza. After her are Jesé, Suso, George Ezra, Raphaël Guerreiro, Debby Ryan, and Will Poulter.