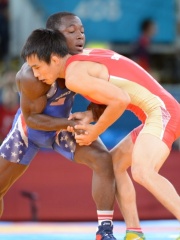 Mingiyan Arturovich Semyonov (Russian: Мингиян Артурович Семёнов, born 11 June 1990) is a Russian wrestler of Kalmyk descent, who won the bronze medal at the 2012 Summer Olympics in the Greco-Roman 55 kg event. His twin brother Sanal Semenov competes in the same event alongside his brother. Read more on Wikipedia

Since 2007, the English Wikipedia page of Mingiyan Semenov has received more than 17,263 page views. His biography is available in 16 different languages on Wikipedia making him the 551st most popular wrestler.