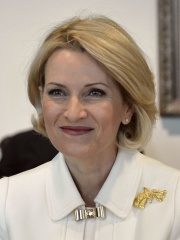 Mimi Kodheli (born 11 September 1964) is an Albanian economist and politician who served as Minister of Defense of Albania in the government of Prime Minister Edi Rama. Read more on Wikipedia

Since 2007, the English Wikipedia page of Mimi Kodheli has received more than 48,788 page views. Her biography is available in 15 different languages on Wikipedia making her the 14,282nd most popular politician.