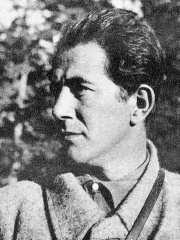 Milovan Djilas (English: ; Serbian: Милован Ђилас, romanized: Milovan Đilas, pronounced [mîlɔʋan dʑîlaːs]; 1911–1995) was a Yugoslav communist politician, theorist and author. He was a key figure in the Partisan movement during World War II, as well as in the post-war government. A self-identified democratic socialist, Djilas became one of the best-known and most prominent dissidents in Yugoslavia and all of Eastern Europe. Read more on Wikipedia

Milovan Đilas was an Yugoslavian Communist politician and writer. He is most famous for his opposition to the government of Josip Broz Tito and his criticism of the Yugoslavian government.

Among politicians, Milovan Đilas ranks 2,397 out of 15,710. Before him are Antonín Novotný, Crown Prince Sado, Anastasia Romanovna, Attalus III, Theobald I of Navarre, and Seongjong of Goryeo. After him are Anne Marie Louise d'Orléans, Duchess of Montpensier, Empress Go-Sakuramachi, Tiberius Claudius Nero, Guntram, Ladislaus III of Hungary, and Prince Aimone, Duke of Aosta.