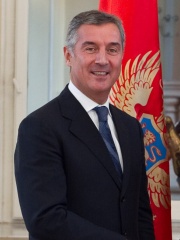 Milo Đukanović (Montenegrin: Мило Ђукановић, pronounced [mǐːlo dʑǔkanoʋitɕ] (listen); born 15 February 1962) is a Montenegrin politician serving as the President of Montenegro since 2018, previously serving in the role from 1998 to 2003. He also served as the Prime Minister of Montenegro (1991–1998, 2003–2006, 2008–2010 and 2012–2016) and is the long-term president of the Democratic Party of Socialists of Montenegro, originally the Montenegrin branch of the League of Communists of Yugoslavia, which governed Montenegro alone or in a coalition from the introduction of multi-party politics in the early 1990s until its defeat in the 2020 parliamentary election. When Đukanović first emerged on the political scene, he was a close ally of Slobodan Milošević during the anti-bureaucratic revolution (1988–1989) and the dissolution of SFR Yugoslavia (1991–1992). Read more on Wikipedia