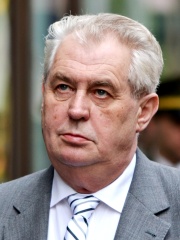 Miloš Zeman (Czech pronunciation: [ˈmɪloʃ ˈzɛman] (listen); born 28 September 1944) is a Czech politician serving as the third and current President of the Czech Republic since 8 March 2013. He previously served as Prime Minister of the Czech Republic from 1998 to 2002. As Leader of the Czech Social Democratic Party during the 1990s, he transformed his party into one of the country's major political forces. Read more on Wikipedia

Since 2007, the English Wikipedia page of Miloš Zeman has received more than 850,686 page views. His biography is available in 73 different languages on Wikipedia making him the 996th most popular politician.

Among politicians, Miloš Zeman ranks 991 out of 14,801. Before him are Grigory Potemkin, John VI Kantakouzenos, Edward the Elder, Wanli Emperor, Johann Friedrich Struensee, and Frederick VIII of Denmark. After him are Nadezhda Krupskaya, Martti Ahtisaari, Adnan Menderes, Michael II, William III of the Netherlands, and Richard von Coudenhove-Kalergi.