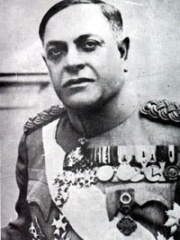 Milan Nedić (Serbian Cyrillic: Милан Недић; 2 September 1878 – 4 February 1946) was a Yugoslav and Serbian army general and politician who served as the Chief of the General Staff of the Royal Yugoslav Army, Minister of War in the Royal Yugoslav Government. During World War II, he collaborated with Nazi Germany and served as the Prime Minister of the puppet government of National Salvation, in the German occupied territory of Serbia. After the war, the Yugoslav communist authorities imprisoned him. Read more on Wikipedia

Milan Nedić was the Serbian Prime Minister during World War II. He was a Nazi collaborator and was responsible for a number of atrocities, including the deportation of Jews from Serbia.

Among politicians, Milan Nedić ranks 2,549 out of 15,710. Before him are Karl Theodor, Duke in Bavaria, Christopher II of Denmark, Alexandre Colonna-Walewski, Juan Manuel Santos, Peroz I, and Joanna II of Naples. After him are Magnus VI of Norway, Eric I of Denmark, Alexandru Ioan Cuza, Grand Duchess Maria Pavlovna of Russia, Theodahad, and Ferdinand Maria, Elector of Bavaria.