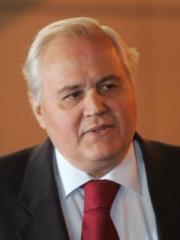 Milan Milutinović (Serbian Cyrillic: Милан Милутиновић; born 19 December 1942) is a Serbian politician who served as the president of Serbia from 1997 to 2002. He served as Secretary for Education and Science of Serbia (1977–82), Director of the National Library of Serbia (1983–87), Ambassador of the Federal Republic of Yugoslavia to Greece (1989–95), Yugoslavia's Federal Minister of Foreign Affairs (1995–97). After his presidential term expired in December 2002, he surrendered to the International Criminal Tribunal for the Former Yugoslavia where he was tried for war crimes. Read more on Wikipedia

Among politicians, Milan Milutinović ranks 6,158 out of 15,710. Before him are Milan Obrenović II, Prince of Serbia, Liu Xiang, Enrico Ferri, Gyanendra of Nepal, Garibald I of Bavaria, and Gongyang of Goryeo. After him are Li Cunxu, Avigdor Lieberman, Árpád Göncz, Emperor Ming of Jin, Octar, and Jindřich Matyáš Thurn.