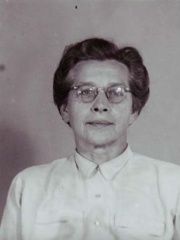 Milada Horáková (née Králová, 25 December 1901 – 27 June 1950) was a Czech politician and a member of underground resistance movement during World War II. She was a victim of judicial murder, convicted and executed by the nation's Communist Party on fabricated charges of conspiracy and treason. Many prominent figures in the West, including Albert Einstein, Vincent Auriol and Winston Churchill, petitioned for her life. She was executed at Prague's Pankrác Prison using a primitive variant of execution by hanging. Read more on Wikipedia

Among politicians, Milada Horáková ranks 2,295 out of 15,710. Before her are Alexander Jagiellon, Senusret II, Fausta, Tariq Aziz, Peter II of Portugal, and Jephthah. After her are Gian Galeazzo Visconti, Kęstutis, Nogai Khan, Julius Nyerere, Peng Dehuai, and Hyeonjong of Joseon.