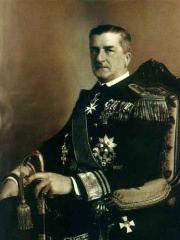 Miklós Horthy de Nagybánya (Hungarian: Vitéz nagybányai Horthy Miklós; Hungarian pronunciation: [ˈviteːz ˈnɒɟbaːɲɒi ˈhorti ˈmikloːʃ]; English: Nicholas Horthy; German: Nikolaus Horthy Ritter von Nagybánya; 18 June 1868 – 9 February 1957) was a Hungarian admiral and statesman, who became the regent of Hungary. He served as regent of the Kingdom of Hungary between World Wars I and II and throughout most of World War II, from 1 March 1920 to 15 October 1944. Read more on Wikipedia

Since 2007, the English Wikipedia page of Miklós Horthy has received more than 978,241 page views. His biography is available in 55 different languages on Wikipedia making him the 363rd most popular politician.

Among politicians, Miklós Horthy ranks 360 out of 14,801. Before him are Emperor Meiji, Horemheb, Nerva, Galerius, Erich Honecker, and Jacques Chirac. After him are Louis Bonaparte, Björn Ironside, Mahmud I, Radovan Karadžić, John Hunyadi, and Kangxi Emperor.