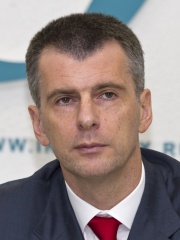 Mikhail Dmitrievitch Prokhorov (Russian: Михаи́л Дми́триевич Про́хоров, IPA: [mʲɪxɐˈil ˈdmʲitrʲɪjɪvʲɪtɕ ˈproxərəf]; born 3 May 1965) is a Russian billionaire, politician, and former owner of the Brooklyn Nets. After graduating from the Moscow Finance Institute, he worked in the financial sector and subsequently went on to become one of Russia's leading industrialists, owning major stakes in multinational corporations in the precious metals sector. While he was running Norilsk Nickel, the company became the world's largest producer of nickel and palladium. Read more on Wikipedia

Since 2007, the English Wikipedia page of Mikhail Prokhorov has received more than 1,177,485 page views. His biography is available in 36 different languages on Wikipedia making him the 261st most popular businessperson.

Among BUSINESSPEOPLE In Russia