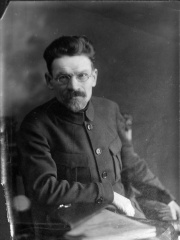 Mikhail Ivanovich Kalinin (Russian: Михаи́л Ива́нович Кали́нин [kɐˈlʲinʲɪn]; 19 November [O.S. 7 November] 1875 – 3 June 1946), known familiarly by Soviet citizens as "Kalinych", was a Soviet politician and Old Bolshevik revolutionary. He served as head of state of the Russian Soviet Federative Socialist Republic and later of the Soviet Union from 1919 to 1946. Read more on Wikipedia

Mikhail Kalinin was the first president of the Soviet Union and served from 1922 to 1946. He was a member of the Bolshevik party and a close ally of Vladimir Lenin.

Among public workers, Mikhail Kalinin ranks 5 out of 15. Before him are Draco, Emperor Taishō, Alois Hitler, and Joseph Fouché. After him are Gaius Maecenas, Thomas Cromwell, Robert Walpole, Demetrius of Phalerum, François Guizot, Ali Hassan al-Majid, and Markus Wolf.

Among PUBLIC WORKERS In Russia