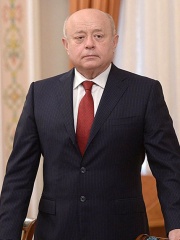 Mikhail Yefimovich Fradkov (Russian: Михаи́л Ефи́мович Фрадко́в, IPA: [mʲɪxɐˈil jɪˈfʲiməvʲɪtɕ frɐtˈkof]; born 1 September 1950) is a Russian politician who served as Prime Minister of Russia from 2004 to 2007. An Independent, he was the head of Russia's Foreign Intelligence Service from 2007 to 2016. Read more on Wikipedia

Since 2007, the English Wikipedia page of Mikhail Fradkov has received more than 161,035 page views. His biography is available in 42 different languages on Wikipedia making him the 8,114th most popular politician.

Among politicians, Mikhail Fradkov ranks 8,070 out of 14,801. Before him are Douglas Hyde, Kashta, Alexander, Duke of Schleswig-Holstein-Sonderburg, Keisuke Okada, Vladimir Kokovtsov, and Gustavs Zemgals. After him are Butigeidis, Alejandro Toledo, David Trimble, Princess Louise of Denmark, Bolesław the Pious, and Nikolai Krylenko.