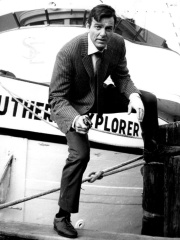 Krekor Ohanian (Armenian: Գրիգոր Օհանեան; August 15, 1925 – January 26, 2017), known professionally as Mike Connors, was an American actor best known for playing private detective Joe Mannix in the CBS television series Mannix from 1967–1975, a role which earned him a Golden Globe Award in 1970, the first of six straight nominations, as well as four consecutive Emmy nominations from 1970–1973. He starred in the short-lived series Tightrope! (1959–1960) and Today's FBI (1981–1982). Read more on Wikipedia

Since 2007, the English Wikipedia page of Mike Connors has received more than 1,486,620 page views. His biography is available in 30 different languages on Wikipedia making him the 2,326th most popular actor.

Among actors, Mike Connors ranks 2,310 out of 8,832. Before him are Eugene Levy, Clive Swift, Lena Nyman, Lesley-Anne Down, Lauren Graham, and Robert Foxworth. After him are Joe Don Baker, Mark Bernes, René Auberjonois, Néstor Carbonell, Colm Feore, and Jill Clayburgh.