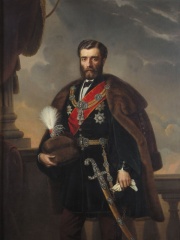 Prince Michael Obrenović III of Serbia (Serbian: Михаило Обреновић, Mihailo Obrenović; September 16, 1823 – June 10, 1868) was the ruling Prince of Serbia from 1839 to 1842 and again from 1860 to 1868. His first reign ended when he was deposed in 1842, and his second when he was assassinated in 1868. He is considered to be a great reformer and the most enlightened ruler of modern Serbia. Read more on Wikipedia

Since 2007, the English Wikipedia page of Mihailo Obrenović has received more than 93,539 page views. His biography is available in 29 different languages on Wikipedia making him the 3,285th most popular politician.

Among politicians, Mihailo Obrenović ranks 3,263 out of 14,801. Before him are Kʼinich Janaabʼ Pakal, Vakhtang I of Iberia, Albert Pike, Hiram Bingham III, Tokugawa Yoshimune, and André-Hercule de Fleury. After him are Cardinal-Infante Ferdinand of Austria, Mohammad Shah Qajar, Harthacnut I of Denmark, Zaifeng, Prince Chun, Pier Luigi Farnese, Duke of Parma, and Albert III, Duke of Saxony.