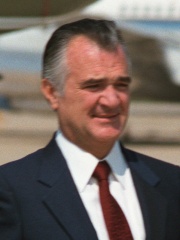 Miguel de la Madrid Hurtado (Spanish pronunciation: [miˈɣel delamaˈðɾið uɾˈtaðo]; 12 December 1934 – 1 April 2012) was a Mexican politician affiliated with the Institutional Revolutionary Party (PRI) who served as the 59th President of Mexico from 1982 to 1988.Inheriting a severe economic crisis from his predecesor José López Portillo as a result of the international drop in oil prices, De la Madrid introduced sweeping neoliberal policies to overcome the crisis, beginning an era of market-oriented presidents in Mexico. In spite of these reforms, however, De la Madrid's administration continued to be plagued by negative economic growth and inflation for the rest of his term. Read more on Wikipedia

Miguel de la Madrid was the president of Mexico from 1982 to 1988. He is most famous for his neoliberal economic policies which led to a period of economic growth and stability.