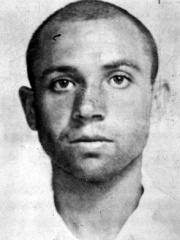 Miguel Hernández Gilabert (30 October 1910 – 28 March 1942) was a 20th-century Spanish-language poet and playwright associated with the Generation of '27 and the Generation of '36 movements. Born and raised in a family of low resources, he was self-taught in what refers to literature, and struggled against an unfavourable environment to build up his intellectual education, such as a father who physically abused him for spending time with books instead of working, and who took him out of school as soon as he finished his primary education. Read more on Wikipedia

Since 2007, the English Wikipedia page of Miguel Hernández has received more than 118,480 page views. His biography is available in 32 different languages on Wikipedia making him the 1,638th most popular writer.

Among writers, Miguel Hernández ranks 1,636 out of 4,883. Before him are Jonas Lie, Ion Creangă, Martin of Opava, Thomas Merton, Paul Gerhardt, and Wayne Dyer. After him are James B. Donovan, Bob Woodward, Alexander Kielland, Gaius Julius Solinus, Stephen Crane, and Enzo of Sardinia.