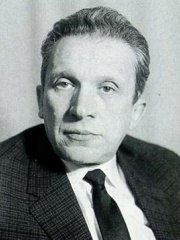 Mieczysław Weinberg (also Moisey or Moishe Vainberg, Moisey Samuilovich Vaynberg; Russian: Моисей Самуилович Вайнберг; Polish: Mojsze [Mieczysław] Wajnberg; 8 December 1919 – 26 February 1996) was a Polish-born Soviet composer. Ever since a revival concert series in the 2010 Bregenz Festival in Austria, his music has been increasingly described as "some of the most individual and compelling music of the twentieth century". Read more on Wikipedia

Since 2007, the English Wikipedia page of Mieczysław Weinberg has received more than 137,850 page views. His biography is available in 17 different languages on Wikipedia making him the 318th most popular composer.