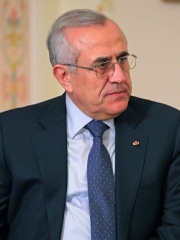 Michel Sleiman (Arabic: ميشال سليمان‎ Arabic pronunciation: [miːʃaːl suleːmaːn]; born 21 November 1948) is a Lebanese Maronite Christian politician who served as President of Lebanon from 2008 to 2014. Before becoming president, he served as commander of the Lebanese Armed Forces from 1998 to 2008.After Lebanese Armed Forces (LAF) commander Émile Lahoud took office as president in November 1998, Sleiman succeeded him, taking his place in December. Read more on Wikipedia

Michel Suleiman is a Lebanese politician and former general who served as the president of Lebanon from 2008 to 2014.

Among politicians, Michel Suleiman ranks 4,221 out of 15,710. Before him are Henry I of Castile, Ivan Vladislav of Bulgaria, Al-Hakam I, Rudolph II of Burgundy, Modibo Keïta, and Xi Zhongxun. After him are Wilhelmina of Prussia, Princess of Orange, Wilhelmine of Prussia, Margravine of Brandenburg-Bayreuth, Alexander V of Macedon, Maria Teresa, Princess of Beira, Margaret II, Countess of Hainaut, and Ivan Silayev.