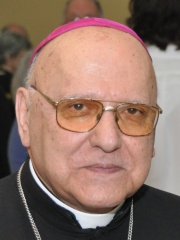 Michel Sabbah (Arabic: ميشيل صباح‎; born 19 March 1933 in Nazareth, Mandatory Palestine) was the Archbishop and Latin Patriarch of Jerusalem from 1987 to 2008, the first non-Italian to hold this position in more than five centuries. Read more on Wikipedia

Among religious figures, Michel Sabbah ranks 1,513 out of 2,272. Before him are Raffaele Farina, Jan Łaski, Dimitry of Rostov, Patriarch Alexy I of Moscow, Dagobert of Pisa, and Yitzhak Kaduri. After him are Matthew Stewart, 4th Earl of Lennox, Caspar Schwenckfeld, Abdullah ibn Ja'far, Thomas Kingo, Bashar ibn Burd, and Kateri Tekakwitha.